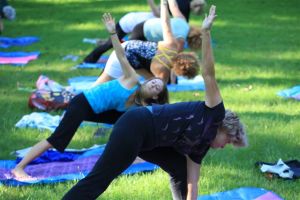 Last year, I asked my editor if I can write an article about a Chaldean American yoga instructor that held classes at my gym. She said okay, except she wanted it to address the belief that yoga is against our Catholic faith. I thought, oh my God, I may have been committing sin for over twelve years!

I interviewed several people: the yoga instructor at my gym; the yoga instructor at Manresa Jesuit Retreat Center; and a Jesuit priest. All talked about the positive health factors associated with yoga. I tried to get a quote from one of the half dozen Chaldean Catholic priests but they didn’t have an opinion on this matter, given it was a foreign subject for them. No wonder I never saw a Chaldean person in a yoga class.

After the article was published, a local non-Chaldean priest sent a letter to the editor stating that there are significant concerns about yoga’s compatibility with the Christianity/Catholic faith. The biggest problem with yoga, he wrote, is that one is going to a source other than Jesus for inner peace. There is no peace apart from Him “who is our peace” (Eph. 2:14). He also called its origin occult. This was all new information to me, especially since many of the postures we performed in yoga classes were common exercises we did in Iraq.

Well, sin or not, I ended up in a yoga class last night, and thank God for that. I have not been able to go for a while because lately the gym’s daycare is not my son’s most favorite place. My husband, seeing my frustrations, said he’d watch the kids and encouraged me to go out there and commit this “sin” – though he did not know that’s what it was. We’ll just keep that a little secret.

2 Comments to “The Forbidden Yoga”