Documentary about my mom – Coming in September!

Remember the three beautiful filmmakers from France who honored my home with their visit? Well, they just informed me that the documentary about my mother’s experience in attaining her US citizenship is coming out next month. It will be posted on their website, http://www.mybelovedenemy.com , sometime in September.

My Beloved Enemy is a project portraying Iraqi-American stories ten years after the start of the war. The film crew toured different parts of the United States to show the challenges and triumphs that various Iraqi-American individuals and families face.

With all the misconceptions and stereotypes that exist out there in the mainstream media, this kind of project is especially important today. It shows the everyday truth that is neglected, overlooked and undermined. Yet it is this truth that could help us put an end to unnecessary killings, even wars, that were ignited by misconceptions and stereotypes.

It is also important because in 2007, the U.S. refugee program began admitting Iraqis to the country, to date some 85,000. Still more are entering the United States every day. What better way to know the people who are to become our neighbors than to watch a real heartfelt documentary about them!

This evening the Bharatiya Temple presented a program entitled Nritya Aradhana. I attended with my children and watched a performer dressed in traditional white and blue Hindu attire entrance an audience of about a hundred people with her unique moves and beauty. The dancer was decorated with gold, her long braid tucked beneath her belt, and her bare feet and hands painted red. The group of musicians and vocals were wonderful as well. So was the light food that for a minimal fee was served afterwards in the cafeteria. A spicy chai followed.

Aside from the program, I was impressed by the amazing infrastructure of the temple. One of the rooms in the building was set up with chairs dressed in gold covers.

“Is this for a wedding tomorrow?” I asked.

“Yes,” said one of the many women working in the hall.

Another nearby room was being filled with fresh flowers. Oh, how I wish I could attend this wedding and witness first-hand how Indians celebrated such a sacred occasion! Movies and youtube were not quite adequate enough to quench my curiosity.

On my way out, I learned that the temple offers a lot of services, such as yoga and meditations. Will likely revisit this temple sometime soon.

He Slam Dunks It at the Church Picnic!

Tents spread over the green front yard of the church. Hot dogs and hamburgers were on the barbecue grill. Tables of food extended long and wide, serving snacks and homemade summer salads. One woman brought over her delicious juicy barbecue ribs and cowboy bacon beans. A paper explaining the small $1 and $3 fees for the food was initially placed on the table, but it soon flew into the air and landed on the ground. No one bothered to pick it up. No one noticed it was missing. There wasn’t anyone to collect money, just servers serving food, with a happy smile on their faces. After five minutes of searching, I finally spotted someone to give my tithe to.

Something about the atmosphere reminded me of the community in “Little House on the Prairie.” I watched one pastor kick a ball around with two little boys. Another pastor walked to the water slam dunk and pressed the button so the person inside fell in the water. An older couple at our picnic table told us they’ve been coming to Freedom Christian for four years. The husband played the piano. He was blind, but he could see more than most people I knew.

It was a wonderful and blessed way to start a Sunday. 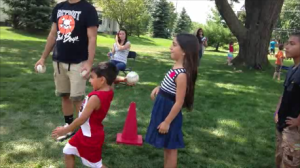 A few days ago my nieces spent the night and the next day, I decided to take them to Burger King for lunch. I’ve been trying to eat more healthy so I observed the menu and pushed myself to order the chicken Caesar salad with citrus vinaigrette dressing. I placed the tray of chicken nuggets, whopper Jr.’s, fries, ketchup and sodas on one table where the kids immediately attacked.

At a separate table I sat with my tray of salad. I undid the plastic lid, looked at the salad and without even touching the thing, I got sick. I couldn’t do it! I couldn’t sit at a Burger King and not eat a whopper! Not when everyone around me was doing it. I returned the salad to the front, apologized profusely and asked if I could swap it for a whopper.

“Of course!” said the manager. She totally sympathized.

I immersed in my whopper, all the meanwhile remembering the wise words my son spoke last winter, “Burger King is healthy.”

It sure is. After enjoying my whopper, I was able to exercise at the gym, focus on my writing, make my husband a nice dinner, tell my kids a bedtime story – all with a smile on my face!

Is Islam a Religion of Peace? 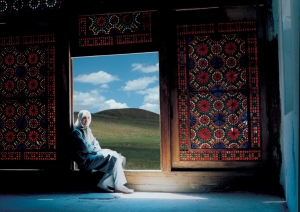 I went to cover a story at Eastern University entitled “Is Islam a Religion of Peace?” One of the main speakers was a Muslim who flew to Michigan from Turkey. I guess this is a debate that has been going around for a while, and all over the world.

The speakers each had very valid points to think the way they did. But one of the Christian speakers mentioned that the fear we had of Muslims was not an exaggerated one, that we were not fighting an ideology but Islam itself. He was concerned that if we didn’t put a stop to “it” we could be under real threat. He used Hitler as an example.

“Look what he did to the Jews,” he said. “He wanted to wipe them all out.”

True. But wasn’t Hitler a Christian? As was the American Presidents who bombed, sanctioned, and again bombed Iraq until Christians had to flee their land and live in Diaspora? There are a load of other examples of how violence was second-nature to some Christian men throughout history and even recently. But that definitely does not mean that all Christians are a violent group of people. Quite the contrary!

Regardless of what the speakers said, it was wonderful to see them respectfully engage in a dialogue and afterwards, hug each other. They proved that communication, not violence, is the real way to peace!

Enjoying a Bonfire and Smores at Church 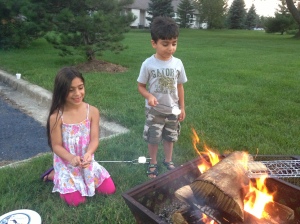 I was determined to make it to my church’s Bible Class today, but once I got there and dropped off the kids in the daycare, I was informed that for the month of August we are to do whatever we choose during that hour and a half – read our bible or mingle with peers to discuss religion. I sat in the café and enjoyed some time to recollect my thoughts and read.

When we walked out of church, on the way to our car, we noticed a bonfire in the backyard. The pastor invited us to join everyone else. Well, needless to say my children and I had a wonderful time. We sat on picnic tables, watched the young girls and boys play ball, the little children waddle around, fall in the mud, then pick themselves up and play again. Someone passed around 40% off coupons from the Gap – perfect for back-to-school shopping.

The clouds had a hint of red from the sun behind them. The weather was not too hot, not too cold. The grass was green and the mood was heavenly. The spirit of this church, Freedom Christian, is always serene, friendly and truly holy. 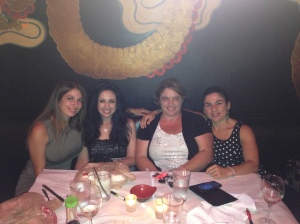 We were the “four – sometimes five – musketeers” until one by one each of us, with the exception of Jehan (in the grey dress), got married and had kids. Now it’s Jehan’s turn to get married. In an attempt to spend some quality time together before she moves to California, we met at Mon Jin Lau for dinner.

“Do you know it has been 15 years since we last went out like this?” Jehan asked.

We did not know that. She could calculate these numbers because unlike us, she does not have to juggle so many things at once – at least not yet. One thing I must give our little group credit for is how little they have changed these past fifteen years. They still maintain a healthy active lifestyle while maintaining a home and raising a family.

May we continue to meet like this, but not wait another fifteen years to do so! 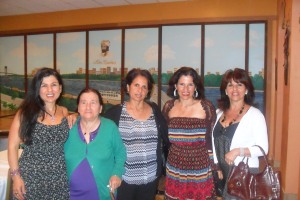 The story we leave behind is the best message we give to our children. My mom does not like to tell stories, but she has lived her life in a way that says a lot. Still, for years I’ve been trying to get detailed information from her about her childhood, her early marriage and motherhood. But while I have been successful in doing great interviews with the most prominent members in the Chaldean American community, I have not been too successful with her. She always tries to divert my questions.

Finally, on Wednesday, with the help of my sisters, we poked around until we learned that in the village of Telkaif in northern Iraq, snow did sometimes appear, during which time my mother and other children would slip and slide over it – basically ice skating with shoes.

“What was the biggest lie you ever told?” I asked her.

“Yes, you did,” my older sister responded. “I remember when Babba gave you spending money, you would put it away and when it totaled to two dinars, you gave it to your mother.”

My mother shrugged. “I did do that. They needed it. They didn’t have much.”
“So that was for a good cause,” my sister said.

Even when my mother lied, it was out of the goodness of her heart.

Well, given that my mother is now 80 years old, I have a lot of catching up to do – with regards to jotting down her stories. So I pray that God blesses us with her presence for a long long time.