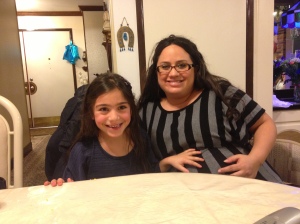 My daughter with her godmother, who is also my niece and my goddaughter and who is obviously expecting a baby

My niece and goddaughter, who is also my daughter’s godmother, had her baby shower today (it’s not as confusing as it sounds). For a number of family members, this was the first baby shower they had ever attended. Myself, I’ve only gone to two, even though I am an aunt to some 30 + nieces and nephews and a great aunt to eleven or more (not sure). Some of the family members did not understand this ritual as in ancient Egypt and ancient Greece, during the Middle Ages, the Renaissance, and the Victorian Era, celebrations took place after the birth of the baby.

The modern baby shower started after WWII during the baby boom era and evolved with the consumer ideology of 1950s and 1960s. They not only served an economic function by providing the mother-to-be and her home with material goods that lessened the financial burden of infant care, but purchased “things” also emerged as the principle whereby women make themselves into mothers. The shower basically serves to teach the woman into the special behaviors associated with her new role in society.

We expect baby Jude in March and we still have some 25 nieces and nephews to marry off.