Iraqi Americans: The Lives of the Artists 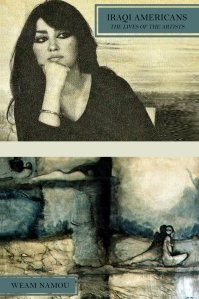 Artists have a story, a story that affects their pallets. In Iraqi Americans: The Lives of the Artists, I wanted to honor artists of Mesopotamian ancestry by giving them the opportunity to share their incredible stories themselves rather than risk having others to do it for them, as was the case with Layla Al Attar.

Layla Al Attar died in 1993, along with her husband, after her house was bombed by a US missile. Iraqi news announced that she was killed since she was responsible for creating the mosaic of George Bush Sr.’s face on the steps of Al Rashid Hotel, over which Iraqis and people from all over the world walked on upon entering. Unfortunately, she is remembered more so by how she died rather than by her incredible talent and the way in which she lived her life. Worse than that, many misinterpret the play 9 Parts of Desire by Heather Raffo to be based on her life.

Like Al Attar, the 16 artists in this book are not victims, but victors over their lives, following their passions and finding ways to showcase it despite any and all challenges.

This book is available in print and as an eBook