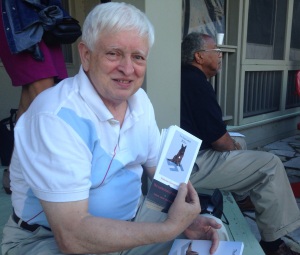 Since the spring of this year, when my friend and poetry editor Elisabeth Khan returned from India and we began to meet more frequently, we have been talking about Walerian Domanski, who is a member of our Rochester writers group.

In her beautiful Flemish accent, Elisabeth told me that she’d been editing Walerian’s second short story book collection, called The Calf. His first book, The Dog Called Hitler, was originally published in Poland. The Dog Called Hitler is about life and problems of common people, mostly very poor people in Communism Poland. But the book is universal, showing the heroism and weakness of people.

Elisabeth found his stories delightful, full of good writing, humor and satire. I told her that last year, for the first time I had listened to him read a poem, a poem that was very beautiful and touching.

Our discussions about his work was inspiring, leading me to write a poem based on his short story title: Kiss My Ass. Then one day, Elisabeth said to me, excitedly, “Our friend Walerian has won the Kresge Fellowship!”

“I suddenly became famous,” Walerian said to us as Elisabeth and I took a stroll with him by Lake St. Clair. “Even my wife, who did not used to read my work, suddenly started reading it.”

We asked him what he was going to do with the fellowship money and he said, “Buy good liquor.” We laughed.

Walerian continued to make us laugh with his sense of humor last Friday evening at Dr. John Telford’s home in St. Claire Shores. The beautiful house is on Lake St. Clair, and Dr. John Telford is the author of A Life on the Run, a memoir about his life and times as a Detroit educator and activist. He hosted, as he has done for some years now, the summer potluck writer’s group meeting.

Later on, we gathered in the backyard and various writers read their works. Walerian read one of his short stories, which was short, sweet, and funny. We have so much talent in our community!

Born in Russia, Walerian went to Poland with his parents in 1946. In Poland, he finished elementary school and high school, received a master’s degree in civil engineering and worked for state owned construction companies. Having joined an anti-communist movement, he was jailed by communists in December 1981. In 1987, he came to the United States as a political refugee.

From the beginning he loved the United States. He found a job in a geotechnical company and in 1994 he received a master’s degree in geotechnical engineering from Wayne State University. In 2008, he retired from the City of Detroit and started cartooning again, and soon switched to writing. He’s truly a man with many talents. Check out his book by visiting this link: http://www.amazon.com/The-Called-Hitler-Walerian-Domanski-ebook/dp/B00TWJ029O

2 Comments to “The Dog Called Hitler – A Kresge Fellowship Winner!”