Memoirs of a Babylonian Princess 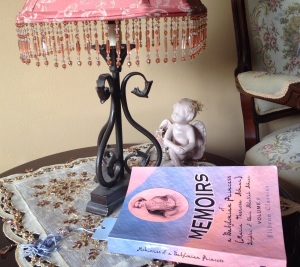 I have finally started reading Memoirs of a Babylonian Princess, a book written 200 years ago by a woman from Telkaif in northern Iraq, my ancestors’ once Christian town which was overtaken by the Islamic State in the summer of 2014. The fact that this little gem of a book, and its author Maria Theresa Asmar, were practically buried into oblivion among its own people is quite disturbing to me, to say the least.

I first learned about Memoirs of a Babylonian Princess when I had to cover a story in the summer of 2012. Emily Porter PhD, an Iraqi-British artist, author and activist, had traveled from her hometown in Great Britain to do work at the Metropolitan Museum of Arts in New York regarding Asmar’s memoirs. She gave a lecture at Shenandoah Country Club about this memoir, and like Porter, I was amazed that few, if any, people in our Chaldean community had heard about this 720 page book.

Porter had stumbled upon this book when she was searching through a friend’s library.

“I found a book about Telkaif that briefly mentions Memoirs of a Babylonian Princess, followed by the criticism that Maria Asmar exaggerates in her work,” said Porter. “I thought, over 700 pages of a memoir, written by a woman from Telkaif in the early 19th century, and all this person has to say about it is that the author exaggerates in her writing?”

Maria was no ordinary woman, either. She traveled alone to Europe, the Middle East and other parts of the world. She met with Queen Victoria and even dedicated her book to the queen. She set up a school for women in Baghdad and welcomed western Christian missionaries, who then bribed the Turkish government to give them the licence for the school and forbid Maria to carry on with her project. Left frustrated and angry to have been treated this way by fellow Christians, she sought sanctuary with the Muslim Bedouins. She set about recording their daily lives, everything from the weddings and celebrations to their assaults on other tribes.

As I read her memoirs, I am in awe of the rich material it contains and of the beauty in Maria’s literary voice. I also find it interesting that while her work was neglected by her own community, in Great Britain and even in the United States, it has received a much wider and respectable recognition.

5 Comments to “Memoirs of a Babylonian Princess”