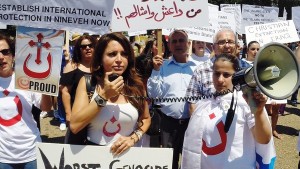 My friend Nahren sent me the following report:

It is being reported by my journalist friends in Khabour that ISIS has started using the Assyrian Christian hostages as human shields including the children against the Syrian Military. It is confirmed that the amount of hostages right now are 217 and the difference from the original amount were hiding in red zone areas until they made their way back to their families and were identified. However, ISIS is requesting a ransom of $100,000 per Assyrian Christian hostage. The Sheikhs are trying to demand for their release through consistent communication and the sheiks claim that the 217 are still alive. Many Americans and non-Assyrians have attempted to drive into the Northern Part of Khabour which is under the Kurdish occupation. They were turned away even with permits from the KRG.

It is also reported by numerous sources that as some of the civilians made their ways back to their homes, they found that the Kurds completely have taken over their homes and properties. They were told that their homes did not belong to them anymore. Journalists and media are not permitted in the area anymore and witnesses have confirmed that they were allowing only Kurdish civilians to enter through the border. Furthermore, it is reported that the Kurds are already attempting to convert the Assyrian Christian village names into Kurdish names (it’s confirmed that 2 to 3 villages have already been changed).

I asked Nahren, who with other activists demands international protection, why the Iraqi minorities have not yet been helped. She explained part of the problem.

“Our own people are so divided in organizations, political parties, churches and so forth,” she said. “The day our people (Assyrians, Chaldeans and Syriacs) will unite like we used to be, I promise that Nineveh will rise with an amazing power that will be distinguishable in the world.”

Which reminded me of the famous Pogo quote, “We have met the enemy and it is us.”