Serving Our House through Journalism 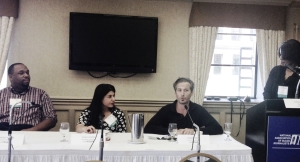 It’s true that a lot of minority groups in America do not receive the air and press time they deserve. But it is also true that in America, there is an opportunity for people to break the mold without risking their life. Here, an association of black journalists says “welcome” to an Iraqi-American journalist like myself, because what they see and appreciate in each other is the heart of journalism, which is an appetite for truth and education, an appetite which journalists in many other countries cannot dare quench.

On October 11th, at the 2014 NABJ Conference in Detroit, sitting on the panel next to award winning reporter Charlie LeDuff of Fox News and reporter Marlon Walker of the Detroit Free Press, listening to the easy and lively manner in which they spoke about how they dealt with “Conflict in the Community”, the topic of our discussion, I realized that a large part of the problem many Middle Easterners and Arabs have is inner conflict. Born and raised under authoritarian regimes, they have difficulty expressing their truths in constructive ways. Rather than influence public opinion and government policy, they try to influence each other – which often builds tension within their own communities rather than create progress.

Investigative Journalism is such a phenomenon in the Arab World that Arab Reporters for Investigative Journalism (ARIJ) based in Amman, Jordan describes it on its website as “still an alien practice.” Many journalists from that region who growing up, were told to “Hush!” and “Mind your own business” have wounds to heal before they can grow wings like the American journalists who were told to “Speak up!” and “Dig for the truth”, who like Charlie LeDuff can confidently say, “This is my house too! We’re all living in the United States, sharing it.”

It is when people from the Arab world, who over the last decade have become one of the fastest growing ethnic groups in the United States, fully comprehend, appreciate and believe in the words “This is my house too!” that we will best serve this house through journalism.

4 Comments to “Serving Our House through Journalism”