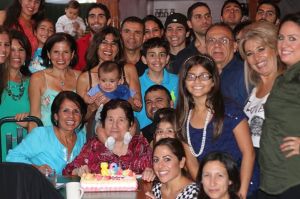 Millions of Iraqis, including my mother and three of my older siblings, have a July 1st birthday. However, that is not the real month and date of when they were born. Until the First World War, many people, especially in villages and remote mountain areas, never had any identification. They simply belonged to their families and tribes. Their language and culture were their identities. Later, many people did not register their children when they were born.

In 1958, Adul Kareem Kasem was making a census, population count. The government told everyone that they could not leave the house for several days. They went door to door doing a count. Anyone who didn’t have a birthday, they gave him or her a July 1st birthday.
“July 1st was the happy medium, and was an easy way to do everything,” my brother told me. He and my older sisters also received a July 1st birthday.

So, since technically we do not know when my mother’s 80th birthday is, we did not feel too bad that it got postponed from July 1st to September 15.