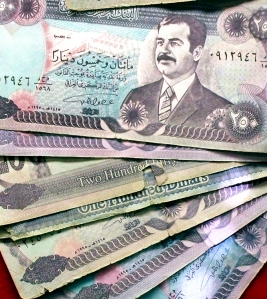 I was watching an Iraqi documentary screened at a local restaurant when I received a call from a friend. I had to take the call. I walked out of the restaurant and stood outside in the cold. My friend, who had suddenly become very ill last fall and has been in and out of the hospital on a regular basis, shared some good news. She’s been feeling great lately, despite having gotten off of her pain medications. A lot of her healing was due to holistic therapy and maybe a little bit, or actually a lot of, love.

I was glad to have been briefly pulled away from the documentary, which was about the suffering of the Kurdish people in Iraq during the Baath regime – the stuff Iraq is made of. I found a couple of things interesting in this documentary. One, the Al Anfal campaign which Saddam was accused of. Al Anfal was a military operation allegedly launched by the Iraqi army during the Iran-Iraq war. Yet although in December 2006 Saddam was put on trial for the genocide during Operation Anfal, he was quickly executed for his role in the unrelated Dujail massacre, which killed 143 men. The Anfal trial, which supposedly killed thousands, recessed on December 21, 2006 and when it resumed on January 8, 2007, the remaining charges against Saddam were dropped.

During Tareq Aziz’s trial, the Iraqi Foreign Minister said that the U.S. State Department, in the immediate aftermath of the Anfal and Halabcha incidents, took the official position based on examination of available evidence that Iran was partly to blame. A preliminary Defense Intelligence Agency (DIA) study at the time reported that it was Iran that was responsible for the attack, an assessment which was used subsequently by the Central Intelligence Agency (CIA) for much of the early 1990s. The CIA altered its position radically in the late 1990s and cited Halabja frequently in its evidence of weapons of mass destruction before the 2003 invasion of Iraq.