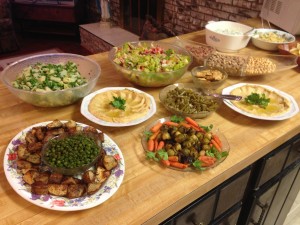 It’s 3:30 am. I finally have a chance to sit down, drink a fresh cup of coffee, a caramel drizzle, and to write my very first post. My in-laws left a few hours ago, but I could not leave the house a mess and go to bed. We had a few unexpected guests tonight. Unexpected guest number one is a cousin who happens to not get along with unexpected guest number two. Needless to say there was a little bit of drama, but that’s expected in any home let alone a Middle Eastern one.

I made the appetizers, my husband made a wonderful barbecue and my in-laws brought over a lot of food like stuffed grape leaves and saffron rice with lamb. Much preparation went into the dishes, but it was nowhere near what it takes to make pacha, a traditional Iraqi dish usually made during the holidays. Pacha is made from sheep’s head, trotters and stomach; all boiled slowly and served with bread sunken in the broth. The stomach lining is filled with rice and lamb and stitched with a sewing thread. The brains and tongues are considered the best parts. The eyeballs are a delicacy. Every Christmas, my sister-in-law spends three days preparing pacha and then on Christmas afternoon my family and I go to have a pacha lunch and exchange presents. As a child, I never understood why grown ups savored pacha so much, but now I do – although I won’t eat any brains, tongues or eyeballs. When I visited my cousin in Germany, he made a pot of pacha – eyeballs and all – but told me he had gone to a farm an hour away to get the ingredients because it was illegal to sell them in the regular market.