The Shroud of Turin Exhibition 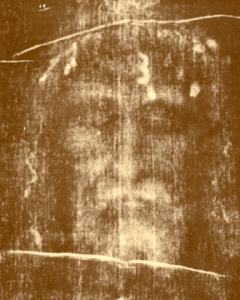 As a journalist who has over the years researched many subjects and covered many stories, I was not expecting to be so awe-stricken by the Shroud of Turin Exhibition in Royal Oak. I entered the audio-guided chambers imagining that I would walk out with a load of information. Instead I came out in a trance.

The Shroud of Turin is a length of linen cloth bearing the image of a man who appears to have suffered physical trauma in a manner consistent with crucifixion. There is no consensus yet on exactly how the image was created, and it is believed by millions to be the burial shroud of Jesus of Nazareth.

The exhibit originated in Spain in 2011. When Spanish native Jose Juan Garrigo visited the exhibit, he felt that this had to reach as many people as possible. He brought it to Metro Detroit, where he has lived since 1988, and expects to tour about 70 other U.S. cities in the next 20 years.

“There’s a lot of controversy around this, whether it’s real or not,” said Ermal Caushaj, Theatrical Productions Manager of Immersive Planet, a company that designs international venues and brought the exhibit to the U.S. “We’re neutral. We’re just presenting the scientific facts and telling people to come see for themselves.”

“This is something for everybody,” said Garrigo, CEO of Immersive Planet. “Whether you’re Catholic, Protestant or an atheist, if you have an intellectual curiosity, this is the place to be.”

This is the key question – do we as a society care enough about our intellect to invest in it? Or will we continue to cast our pearls before swine, to participate mostly in the sort of entertainment that hinders our senses rather than feed our mind, heart and soul?

For me, the answer to that question is more of a mystery than whether or not the Shroud of Turin is real or fake.

For more information about the exhibit which ends August 17, visit shroudexpo.com

Coming to this Country 33 Years Ago

Today marks 33 years that I’ve been living in the United States. I remember on our drive home from Metro Airport February 2, 1981, I was in awe at the sight of all the snow that covered the streets. Having come from a land of sand and rivers, I was not accustomed to so much whiteness.

For years, I’ve wondered why I ended up in this country. It was not I who chose to flee Iraq and come to America. My parents made that decision, of course, since I was a child. I’ve oven thought, did they foresee the terrible condition that Iraq and the rest of the Middle East was going to be in in the upcoming decades?

“You are a creative person, and that’s why you came to this country,” one of my mentors once said to me. “You came here to be able to do your writing and to be able to help women of that region which you came from.”

Thank God, my parents were able to foresee the future and bring us to a place where creativity, and not oppression, is what’s encouraged.