Falling in Love with Political Matters

During Saddam’s era, if you were interested in politics you had to either join the Baath Party, be neutral or, if you wanted to start a new party or movement, risk imprisonment or death. Today, the situation is ten times worse. You risk losing your life (in a most brutal manner) no matter what you do or believe in.

In America, it’s quite the opposite. You get city officials who actually have an interest in establishing a relationship with your diverse community – something the City of Sterling Heights has been known to do over the years. You can even get rewarded for your efforts. That was the case with my colleague Nick Najjar last week when he received an award as Commissioner of the Year for the City of Sterling Heights. Over the years Nick has fostered civic virtue and political awareness, promoted active participation in political changes, and helped citizens identify policies that would benefit them. He is an example of someone who truly understands and honors the privileges this country has to offer.

Americans frequently expect the government to do something about their problems. But, how does the government know what these problems are unless members of the community address them? Some think that getting politically involved would not make a difference. Others, like Nick, have the attitude that it’s easier to act and create than it is to complain and be pessimistic.

It’s easy to complain. It’s rewarding to act – with love. We fall in love with tourist destinations, religious institutions, restaurants or foods, fashion trends, television shows, celebrities, or a new hobby.  But we rarely fall in love with politics and government matters, even though they impact our everyday life and will affect our future.

If we expect the government to do something about our problems, we have to look at how we can help them do just that, even if it simply means becoming better informed and passing that knowledge on to our neighbors. Even if it simply means treating our community with love and appreciation.

Nineveh is Like Any Major City in the U.S. 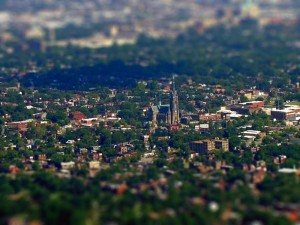 “Nineveh is like any major city in the U.S.,” said Pastor Aaron at today’s sermon.

Nineveh was an ancient Assyrian city on the eastern bank of the Tigris River. It is one of the oldest and greatest cities in antiquity. The area was settled as early as 6000 BC and by 3000 BC had become an important religious center for worship of the Assyrian goddess Ishtar.

“Nineveh, the capital of Assyria, was the superpower of her day,” said the Pastor. “It required three days to circle metropolitan Nineveh. And the Ninevites lived large. They enjoyed the best chariots, the finest food, and the most exotic entertainment. It had an extensive business and commercial system like none in the world. In addition, Assyria had ruled the world for 200 years and was the strongest military power. Sounds familiar?”

He added that Nineveh’s wickedness was great, and unbeknownst to them, their days were numbered. It would not be long before Babylon would overtake Nineveh. God gave them one last chance to repent, however, by sending Jonah. After Jonah’s sermon to them, the entire city turned from their sin of violence, which they were known for, and turned to God. (Jonah 4:4 NLT)

“Shouldn’t we be concerned with Sterling Heights, with that great city and its surrounding cities?” asked the Pastor.

The message is clear, and it resembles the heart of Cultural Glimpse. Wherever we are we are on holy ground. It is wonderful to recognize, honor and serve the sacredness of our homes and communities.