My Tribal and Powerful Mother 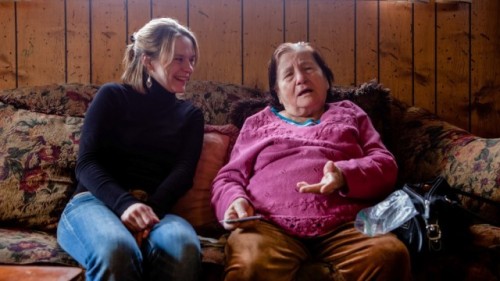 It was a sunny April afternoon four years ago when I was working on my book that I received a call from Eman Jajonie-Daman, an attorney friend and magistrate at the 46th District Court. She said there were French reporters and filmmakers in town doing a web documentary entitled, My Beloved Enemy: Iraqi American Stories.

They wanted to cover an interesting story about an elderly Iraqi attaining their citizenship and hoped I could introduce them to Warina Zaya Bashou, who, at 111 years old, became the second oldest person to be granted U.S. citizenship. I had written an article about Warina the year prior, having lived only a few blocks from my house.

Warina was born in the then-Christian town of Telkaif in Iraq. One moment I remember clearly about our interview is when she said that the keys to living a long life are work, drinking tea, and not going to see the doctor. But when I called Warina’s family, they told me she had passed away a few months earlier.

I then invited the filmmakers over to my home to help them find another subject. An hour later, three beautiful and gracious French people came to my door – writer and director Claire Jeantet, co-director Fabrice Caterini, and chief cameraman Thomas Bernardi.

We had a little brunch, and they ended up interviewing my mom, who was visiting, about her experience in attaining her citizenship in 1997 – a tremendous accomplishment for her, since she had never gone to school. At that time, I helped her memorize fifty questions and answers about the United States, in Arabic, and I was permitted to be her interpreter during the examination. She had to get seven out of ten questions right. She only got one wrong answer.

“Why did you want to get your citizenship?” Claire, the director, asked my mother.

“I wanted to be like my children,” my mother said, and I interpreted. “They all got their citizenship, and so it was now my turn.”

I told the filmmakers how on the day of her naturalization, I was in a hurry to go to work. My mother wanted to take a picture with the judge, like the others had lined up to do. I did not see the point in a picture, though, and had not taken one when I received my citizenship. We left and ever since, when I thought about that day, I wished I had reacted differently. I did not realize it then, but this was my mother’s first major accomplishment for her outside of her home. She was proud to have received a document that honored her efforts; a reward, something that validated her capabilities outside of being a good housewife and mother.

“Now she got more than that picture that she had wanted sixteen years ago,” I said.

In September, the filmmakers showed the documentary at Visa pour L’Image, the premiere International Festival held in Perpignan, France.

“Oh Weam, your mother up there on the screen made a real impact,” Claire told me through Skype. “The audience loved her.”

Her words further illuminated what I had begun to understand about my mother, now that I myself was a wife and mother. This woman had deep tribal and ancestral powers that few people understood. Born in a village and never having gone to school, although she wished she had, she had impacted not only the lives of her twelve children and nearly two dozen grandchildren, but her story had landed in France and later traveled the world through the internet. And at eighty-years-old, she was not done yet.

That same year, my mother’s health drastically deteriorated. On several occasions, my siblings and I thought we were going to lose her. Later, we were also faced with difficult choices of who would care for her now that she was in a wheelchair and had dementia. In the end, I offered to take her into my home. The process has taught me quite a bit about God, life, and humanity.

My mother and I were so different. She was born and raised in Telkaif, a Christian village, and her parents, who lived on a farm, could not afford to send her off to school. I was born in the Muslim city of Baghdad and my attendance of school was as natural as learning jumping jacks. She married my father at age twelve. I married my husband at thirty-four. She never went anywhere alone and rarely left her home. I traveled the world alone.

Since I was young, I knew I had inherited my love for words, books, education, and adventure from my father. I didn’t realize until later in life that I could not have made my dreams come true without my mother’s teachings of discipline and faith in a higher power. She did not go to school, but she knew who she was, having made her life experiences her education.

This article was originally published by Arab America in honor of Women’s Month http://www.arabamerica.com/tribal-powerful-mother/#.WMlmTk7HNFg.facebook